He’s been close in recent years, but 2020 turned out to be the year he topped the standings at Harrah’s Hoosier Park. Trainer Tyler George earned his first title in Indiana at the conclusion of the abbreviated season that came to a close Saturday, Nov. 21. 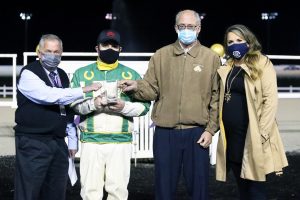 George, a native of Ohio, completed the meet in a big way, winning the first three races on the closing night card and finishing second in the fourth. All were driven by Trace Tetrick, who earned his seventh straight leading driver title and his ninth overall.

George and his wife, Cassie, prepared horses that visited the winner’s circle 73 times, pulling in purse earnings of more than $560,000. Jamie Macomber and Jeff Cullipher were tied at 60 apiece heading into the final night of action and the Macomber Stable had a win to finish second with 61 wins over Cullipher with 60.

Erv Miller, who finished fourth in the standings, was only one of two trainers to go over the $1 million mark in earnings. He joins Ron Burke, who completed the meet with more than $2 million in earnings thanks to some big finishes in the Breeders Crown Championships.

George’s top horse in wins for the meet was Fox Valley Rustler, a winner on closing night bringing his tally to six. He also had three other horses that won five races apiece during the season, Always Soggy, Karefree Kara and Theraputic. His biggest money earner for the meet was the two-year-old pacing standout Brookview Bullet, who won three of seven starts. The gelded son of Always a Virgin earned in excess of $79,000 during the season.