It was a good night for the Tyler and Cassie George Stable. Their team won five races on the card, including the featured $22,000 Fillies and Mares Open Pace with Up Front Flor Ida. 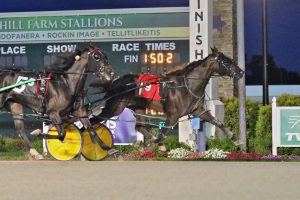 Up Front Flor Ida, driven by John DeLong, was one of five winners on the Saturday, July 17 racing card at Harrah’s Hoosier Park for Trainer Tyler George. Photo by Dean Gillette

Driven by John DeLong, Up Front Flor Ida got away in the two hole behind Mystical Carrie and Trace Tetrick as fractions of :26.4, :56.2 and 1:24.2 were put on the board. In the stretch, Up Front Flor Ida found room along the inside to advance and scored the win by one half length over Mystical Carrie. Rockin Nola and Joey Putnam traveled home in :25.3 to finished third on the outside.

Other winners on the night for the George Stable included the early double with Always Windy and Trace Tetrick winning the first race in 1:52.3 followed by a win in Race 2 by M E Radar Girl and Tetrick in 1:52.3. Moneymakehersmile and LeWayne Miller scored a win for George in Race 4 in 1:50.3. Satdnite Jukebox and Tetrick won the seventh race of the night in 1:52.1.

George is currently ranked third on the list of top trainers at Harrah’s Hoosier Park this season. He is carrying a 27 percent win percentage. Jeff Cullipher is leading the standings followed by Walter Haynes Jr. in second.