Trainer Tyler George has moved into a new decade with some horsepower. The Ohio native that is based in Indiana has won four of his first six races in the first six days of action for 2020. 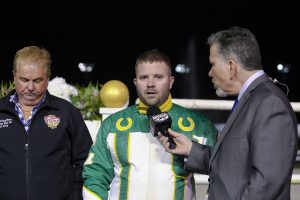 Tyler George, shown being interviewed by Peter Lurie following one of his many wins with Carl Atley’s Always A Prince (pictured on left) has won four of his first six starts for 2020. Photo by Dean Gillette

George, who is concentrating on Miami Valley Raceway, had a training double Saturday, Jan. 4 followed by a training double Sunday, Jan. 5. Winners from his stable included Don’t Mach Mia, Lucifers Legend A, The Dark Shadow and Street Boy, all driven by Trace Tetrick. He has only missed the board once in his first six starts, also scoring a third-place finish with Always A Vision Monday, Jan. 6 at Miami Valley.

George is coming off his fourth straight year with more than 100 wins and more than $1 million in earnings. His best year to date was recorded in 2016 when horses from his barn won 190 races. George finished sixth in the trainer standings last season at Harrah’s Hoosier Park.

George is back in action Tuesday, Jan. 7 with two horses at Miami Valley. He will send A Good Chance A out in the eighth race while Cantescapemydesire is slated to start in the ninth race.