Robert Eugene “Gene” Oakerson, 87, died Thursday, June 3, 2021, at Albany Healthcare, where he had recently resided. He was born in Randolph County on May 16, 1934 to John and Letha (Hodson) Oakerson, and was a life long resident of the Modoc area. 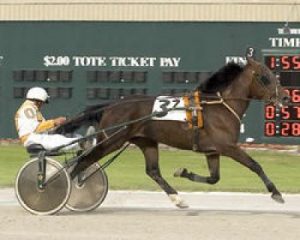 Gene Oakerson, shown with one of his trotters at Harrah’s Hoosier Park, passed away. Services are set for Wednesday, June 9. Photo by Linscott Photography

Gene was a farmer, formerly managed the seed co-op at Pinch, and was well known for breeding, training and driving racehorses. He began driving and training in 1987, mainly at Lebanon and the Ohio fairs before moving over to his home state in the late 1990s. Gene was known for his work with trotters and campaigned such horses as Hoosier Harmony, Mighty Impact, Nancylyn’s Girl, La Lo and Noble Commander. His last drive was in 2011 and his last training start was in 2015. Gene was a member of Indiana Standardbred Association.

In addition to his parents, he was preceded in death by his wife, Karen; a daughter, Cindy Hendrickson; a granddaughter, Jenny Haskell, a brother in law, Robert Cadwallader and a nephew, Richard Cadwallader.

Services will be at 12 noon on Wednesday, June 9, at Culberson Funeral Home, Hagerstown. Burial will follow in Riverside Cemetery, Losantville. Visitation will be 5 to 7 PM on Tuesday and after 11 AM on Wednesday.

Memorials may be made to Alzheimer’s Association.