GD Striker, the former Indiana Sired Fair Circuit contender from the Don Eash Stable, lowered his career best time again Wednesday, Feb. 26 at Saratoga Harness. The four-year-old son of Guccio, who was part of the Eash semi-stable reduction at Blooded Horse Sale last fall, is now two for five in 2020. 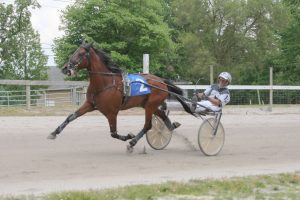 GD Striker is shown with former owner-trainer-driver Don Eash at the Clinton County Fairgrounds this past summer. Photo by Dean Gillette

GD Striker began his most recent start from post one and barreled out for the lead, setting all the fractions in the $6,000 conditioned trot. Around the final turn, he began to open up on the field for driver Jay Randall, scoring his first win at Saratoga in 1:58.3. Trained by Gary Messenger, GD Striker increased his career bankroll to more than $27,000 for owner Jason Darling of New Jersey.

GD Striker completed his three-year-old campaign on a two-race win streak. After winning a race at Monticello in late January, he ventured to Yonkers before relocating to Saratoga where he has scored a third place finish and a win thus far in 2020. GD Striker, who is an Indiana bred through and through out of the Swan for All mare Finally Hanover, was bred by Gerald Yoder of Goshen, Ind.