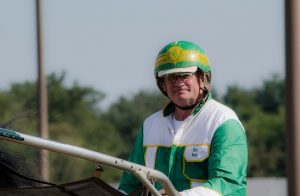 Ernie Gaskin was one of three appointed to the Hambletonian Society Board March 28. The longtime Indiana horsemen brings a wealth of knowledge to the prestigious board. Photo by Dean Gillette

Gaskin has been among the elite in Standardbred racing since the 1970s. He served as assistant trainer for Bill Haughton before moving to Indiana and overseeing operations at Howard Peterson’s Viking Meadows Farm. From there, he was instrumental in developing and creating Crimson Lane Farm, just minutes from Harrah’s Hoosier Park, where he continues to develop young horses and experiences success.

In recent years, Gaskin has had such greats as Jammin Joshua, American Girl and Two O B Wonkenobi. As a trainer, he has 750 career wins with earnings in excess of $7.7 million and has leading trainer titles to his credit, including Harrah’s Hoosier Park.

Gaskin was appointed to the Standardbred Breed Development Advisory Commission by the Governor when pari-mutuel racing began in 1994. He was instrumental in laying the groundwork for the Indiana Standardbred industry as it’s known today.

The entire Gaskin family is involved in racing. His wife, Darla, works alongside him in the stable and helps with operations at Crimson Lane Farm. Their daughter. Amanda, who is a basketball coach at Pendleton Height High School, also works in the barn while their other daughter, Emily Ratcliff, works in the barn along with serving as the race marketing manager and on-air racing commentator for Harrah’s Hoosier Park.