For the fifth straight year, Harrah’s Hoosier Park will team up with WISH TV Channel 8 in Indianapolis for extended coverage of the 2019 racing season. To help kick off the 26th season of racing Friday, March 29, Emily Gaskin, on-air racing commentator and race marketing manager, was a guest on the show with Indy Style host Amber Hankins. 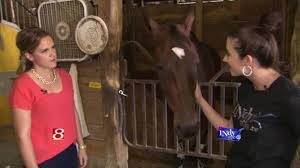 Emily Gaskin has appeared on Indy Style numerous times to promote Indiana Standardbred racing. She hosted a segment with host Amber Hankins a few years ago in one of the barns at Harrah’s Hoosier Park. (Photo by WISH TV)

Gaskin talked about the activities and promotions set for the year as well as the return of racing to Central Indiana. Indy Style will feature Harrah’s Hoosier Park several times throughout the season thanks in part to a partnership with Indiana Breed Development. WISH TV will also air the 26th edition of the $300,000 Dan Patch Stakes Friday, Aug. 9.

Opening night is set with 14 races featuring the newly developed Claiming Challenge, which spans several different claiming classes over opening weekend with purses at the $300,000 mark for all combined events. The season extends through Saturday, Nov. 9 with the first race going to post at 6:30 p.m. each evening. Racing will be held on the traditional Tuesday through Saturday schedule.