Emily Gaskin, longtime race marketing manager and on-air racing analyst, was one of four Standardbred handicappers featured in the May issue of “Hoof Beats.” Gaskin was part of a roundtable interview format for the story “Beating the Odds,” which delved into the handicapping process related to each of their jobs. 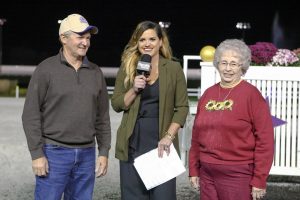 Gaskin identified her style of handicapping as identifying class and speed, but also noted she is constantly trying to learn and perfect her skills when it comes to picking winners. Gaskin noted she starts her process as soon as a program is over, analyzing why a race played out the way it did, or why a horse didn’t fire. She also spends time looking at the overnight and notes any trainers, drivers or horses that are shipping in.

Gaskin went on to explain she puts a lot of emphasis on driver choices, stating “I think driver choices are a major factor to handicapping. Driver choices can be relative to the driver, but more often than not they pick the right horse.” She usually narrows a field down to four or five choices and then digs deeper into those horses for final selections.

Gaskin noted her “go-to” wagers are exactas, but enjoys the multi-race sequences. She also noted that carryovers and lower takeout wagers are important to Harrah’s Hoosier Park.