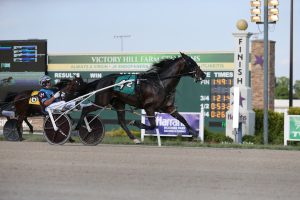 Dubious Claim and Sam Widger scored a win in the claiming ranks in 1:49.1 Saturday, June 12 at Harrah’s Hoosier Park. The Western Terror gelding was claimed out of the race. Photo by Dean Gillette

Dubious Claim began his mile from post four and got away near the back of the pack. Bngs Express and Michael Oosting got the seat at the front early on, with John Mac and Trace Tetrick moving to the lead at the quarter in :26.1. He was immediately followed to the front by Keystone Tenacious and LeWayne Miller, who took over after the half in :53.2. Dubious Claim moved to the outside traffic lane around the final turn and by the head of the stretch, he had reached the leaders.

Dubious Claim kicked into gear and paced home in :26.3 to score the win in 1:49.1. Keystone Tenacious finished second followed by Bngs Express for third. Trained by Hector Herrera, the seven-year-old gelded son of Western Terror earned a career best time in the effort. He now has 24 career wins and more than $230,000 in earnings. He had paced under the 1:50 time barrier before in his career at age five at The Meadowlands, but was never able to win a race below the mark.

Dubious Claim was a recent claim by owner Garcia Power Inc. of Crete, Ill. He was claimed out of the race by Matthew Riggle and will race under new connections moving forward.

Earlier in the day, two-year-olds were out in full force in the qualifiers. After two qualifiers were held for the freshman on Wednesday, six two-year-old qualifiers on the pace were held showing off some impressive performers, giving racing fans something to look forward to this season.

In the very last race, Soaring Now and LeWayne Miller scored a win in 1:56.2 in their first career try, pacing home in :25.4. The JK Endofanera colt, owned by James Miller of Kentucky and trained by Aaron Stutzman, moved to the lead after the half and strode away from the field, winning by three and three-quarter lengths.

Ponda Warrior and Peter Wrenn also looked impressive, exchanging front end honors with Marvelous Marshia and John DeLong for most of the mile. Ponda Warrior pulled out to match strides with the filly before finishing together at the wire in 1:57.2. Both two-year-olds paced home in :26.0 in their debuts.

Ponda Warrior is trained by Jay Hochstetler and owned by Hochstetler along with Finkelberg Racing, and South of the Tracks Rac Inc. Marvelous Marshia, a daughter of Always a Virgin, is owned by William DeLong, Patrick DeLong, Mia DeLong and Marsha Lewis-Veitia. Roger Welch trains the speedy freshman.

Alloutblitz and Sam Widger were winners in 1:57.4. Trained by Jeff Cullipher, the JK Endofanera filly is owned by Pollack Racing and Cullipher. She was a neck winner over Topville Somrocket and Brandon Bates for trainer Jay Hochstetler, a two-year-old colt by Rockin Image owned by Connie Hochstetler, John Schoo, Louise Mercuro and South of the Tracks Rac.

The lone trot of the day was won by Yo Mister, a son of Dover Dan in 2:00.0. Owned, trained and driven by Verlin Yoder, the gelding was a winner by six lengths with a final quarter in :27.0.

Other two-year-old winners on the day were Fulfullnmydestiny (James Yoder) in 1:58.0, a son of Tellitlikeitis, and Patsville, a filly by Huntsville for John DeLong and trainer Roger Welch in 1:57.1.