Indiana Sires Stakes action began Sunday, July 11 for two-year-old colt and gelding pacers with four divisions featured on the card. Ponda Warrior and Soaring Now both winning their legs in 1:51 and change. 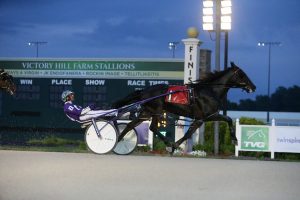 Ponda Warrior and Brandon Bates scored one of the quicker win in the first round of Indiana Sires Stakes action Sunday, July 11 at Harrah’s Hoosier Park. Photo by Dean Gillette

Starting from post one, Ponda Warrior got away from the gate with speed and was able to secure the spot behind race favorite Gentle Giant and Trace Tetrick through fractions of :27.4, :57.1 and 1:25.2 before popping out to challenge. In the stretch, Ponda Warrior paced home in :25.4 to score the win by two lengths in 1:51.3 with Brandon Bates at the controls. The Longest Yard and Michael Oosting finished second followed by Gentle Giant in third.

Ponda Warrior is trained by Jay Hochstetler. The Rockin Image colt is owned by Hochstetler along with Finkelberg Racing and South of the Tracks Racing. Pond-A-Acres bred the colt who is now two for two in his young career. His time of 1:51.3 also marked a new career best for the colt out of Sweetnsinful, who earned a mark of 1:50.4 and nearly $400,000 during her racing career. His connections purchased him for $37,000 last fall at the Hoosier Classic Yearling Sale.

Joining Ponda Warrior as a quick winner in the first leg of Indiana Sires Stakes was Soaring Now, the standout freshman pacing colt from the LeWayne Miller Stable. Soaring Now started his journey from the outside post eight and rolled toward the lead as Fulfullnmydestiny and James Yoder set the first fraction of :26.4. Soaring Now was on the outside in fourth and remained in mid pack as Big Law and Sam Widger moved to the front for the middle fractions of :55.2 and 1:24.1.

In the stretch, Soaring Now kicked into full gear and rallied by his opponents, pacing home in :26.2 for the win in 1:51.0. Fulfullnmydestiny finished a half length back in second followed by Big Law in Third.

Soaring Now is owned by James Miller of Kentucky. He was a purchased for $6,000 from the Luckiana Farm consignment last fall and is now three for three in his career. The time in the mile also marked a new career best for the JK Endofanera colt, who has $37,000 in career earnings.

Other Indiana Sires Stakes winners in the first leg were Dalby Hanover and Hangry. Trained by Britney Dillon, Dalby Hanover came from off the pace and sped home in :26.1 for his win in 1:53.1 with Joey Putnam at the controls. A longshot winner, the Rockin Image gelding owned by Charles Stein paid $40.80 for the win.

Hangry was the final Indiana Sires Stakes winner in the two-year-old category with a win in 1:53.3. Guided by Trace Tetrick, the Rockin Image gelding moved into the lead in the stretch for the win by one and one-quarter lengths over Always-a-laser and Mike Peterson. Trey’s Charlie and Charlie Conrad finished third.

Hangry is trained by Erv Miller and owned by Shim Racing LLC of Illinois. Shim Racing also bred the freshman who was making his first lifetime start.