Freaky Flyer may not be the most famous foal by Indiana sire Dontgetinmyway, but he is certainly one of the most resilient. At the age of 13 he is still going strong and just scored his third straight win in claiming action at Pompano Park Sunday, Nov. 7. 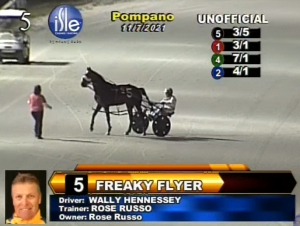 Freaky Flyer, the 13 year old son of Dontgetinmyway, picked up his third straight win Sunday, Nov. 7 at Pompano Park. He was driven by Wally Hennessey.

Starting from post five, driver Wally Hennessey had Freaky Flyer primed to leave the gate and was in the center of the track as the gate folded, finding a perfect two-hole position behind leader Terlingua and Braxten Boyd. As fractions of :28.0 and :57.0 were set, Freaky Flyer made his move heading into the final turn and was on top by four at the head of the stretch. The Indiana sired gelding floated home the winner in 1:54.2, a length ahead of CC Big Boy Sam and Joseph Chindano Jr. Payne for Pres and Kevin Wallis finished third.

Freaky Flyer is owned and trained by Rose Russo of New York, who acquired him in June of this year. He was bred by Eugene Yoder of Topeka, Ind. Russo is the 31st owner of Freaky Flyer, who has traveled through many tracks and many claiming ranks through his career that includes 412 starts. He has not missed one year of racing since beginning his career at two and now has 53 career wins and more than $330,000 in earnings. His best year to date was as a 10-year-old when he won 11 races. His career best of 1:53.2 was taken as a nine-year-old at Batavia Downs.

Freaky Flyer is now on a three-race win streak. He competed at Batavia before shipping to Pompano Park in late October this year for Russo. Freaky Flyer was sold as a yearling in the Indiana Select Sale under the name Westedge Nic A Way before being renamed. He brought $2,800 through the ring. He is only one of three foals from the mare The Nanny and is the only one to win a race.

Freaky Flyer is ranked among the top 15 all-time leading foals by Dontgetinmyway, who has sired such greats as Go On BB, a millionaire standout with more than $1.4 million in earnings, and Rocket Fuel, the uber tough Indiana Sires Stakes champion with earnings of more than $784,000. Also, a top Dontgetinmyway horse was the mare Radar Contact, who earned the fastest mark of his foals at 1:49.2 and earnings of $983,000.