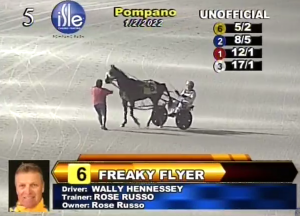 The Indiana sired son of Dontgetinmyway, Freaky Flyer began his race from post six and was content to follow along for driver Wally Hennessey as Warrawee Victor and Ken Holliday set the early fractions of :27.3, :57.3 and 1:26.0 in the $4,000 claiming event. Heading into the final turn, Freaky Flyer had waited long enough. The gelding flipped three-wide with a big move, coming out of the turn in second place.

In the stretch, Freaky Flyer battled with Warrawee Victor on the inside and Eastender and Tyler Jones on the outside. The trio of horses were across the track at the finish with Freaky Flyer picking up the win by a neck over Warrawee Victor. Eastender, also an old-timer at 11 years old, finished third. All three were timed in 1:55.1.

Freaky Flyer paid $7.60 to win. He is owned and trained by Rose Russo of New York. Eugene Yoder bred the gelding, who began his career as a two-year-old at Scioto Downs for the Tom Horner Jr. Stable before moving to Indiana Downs. To date, he has 54 wins in 420 starts and more than $335,000 in career earnings. His career best time was recorded at the age of nine at Batavia in a time of 1:53.2.

Freaky Flyer was purchased as a yearling for $2,800 from the Indiana Select Yearling Sale. His original name was Westedge Nic A Way, and he was a representative of the first wave of Indiana stallions who made an impact on the Indiana breeding program. Dontgetinmyway is best known for his daughter, Go On BB, who earned nearly $1.5 million during her career and was the queen of the Indiana pacing females in the late 2000’s. Other standouts by Dontgetinmyway includes Radar Contact, Rocket Fuel, and a Sweet Ride, who all made more than a half million dollars. His quickest was Radar Contact, who earned a mark of 1:49.2. Radar Contact has had issues as a brood mare, but she has a foal, Stay Grounded, that is a yearling in 2022 by Stay Hungry.