According to a post on social media by the Rheinheimer family, Freaky Feet Pete has retired from racing. The seven-year-old son of Rockin Image retires with a mark of 1:47.1 and earnings in excess of $1.6 million. 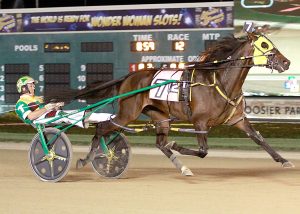 Freaky Feet Pete and Trace Tetrick are shown winning one of the many Indiana Sires Stakes at Harrah’s Hoosier Park during their career. Photo by Dean Gillette

Freaky Feet Pete captured the attention of the racing world with a win in the 2015 Breeders Crown at Woodbine Mohawk. The horse won 15 of 17 races that season and more than $850,000 and brought notoriety to the Indiana breeding program.

Owned now by Mary Jo and Marty Rheinheimer and trained by Marty, Freaky Feet Pete’s name was always linked to trainer Larry Rheinheimer. Together, the duo earned respect nationally before Larry’s untimely passing. The Rheinheimer family continued the work Larry had started with Freaky Feet Pete, who completed his career with 37 wins in 76 starts and earlier this year took a mark of 1:49.4 as a seven-year-old, still proving he had speed even in the twilight years of his racing career.

Bred by Larry, Freaky Feet Pete is an Indiana bred through and through. He is out of the Indiana sired Pilgrims Punch mare Skyway Lori, who took a mark of 1:54.1 and earned more than $56,000 during her racing career. She has been a productive brood mare for the Rheinheimers, not missing a year with a foal from 2005 through 2015. Every one of her foals raced with seven of 11 earnings six figures. All 11 raced and took marks of 1:57.2 or faster, including nine with marks of 1:54.0 or under.

Freaky Feet Pete is slated to join the roster at Paul and Cathy Webb’s Ivy Lane Farm for the 2020 breeding season.