Foxy Rigger has returned with the same amount of skill for her three-year-old season. The sophomore daughter of Riggins won her seasonal debut Saturday, June 20 in the $10,000 Fillies and Mares Open 3 at Harrah’s Hoosier Park. 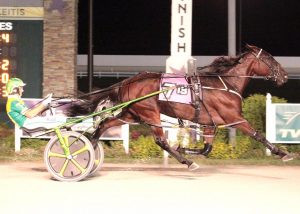 Starting from post one, Foxy Rigger and Trace Tetrick followed American Sara and Ricky Macomber Jr. to the first quarter in :28.0  before moving out and taking control of the race, posting fractions of :56.1 and 1:23.4 before rallying home with a final quarter in :27.2 to win in 1:51.1, a neck ahead of American Sara. Ideation Hanover and Sam Widger finished third, giving trainer Jeff Cullipher two horses to hit the board in the race.

It was a good night to celebrate Indiana sired fillies and mares as Dojea Rita picked up a new career best time, winning a conditioned pace in 1:51.3. The Tellitlikeitis four-year-old cut the mile for Tetrick, fending off a late charge by Hilary Barry N and John DeLong to win by a head. Late Night Date A and Macomber finished third.

Dojea Rita, trained by Donna Loney, is owned by Joe Smith and Michelle Graves. Bred by Dojea Stables, the mare now has three wins in six starts this season and boosted her earnings to more than $135,000 with the latest win.

Rockin Nola was also a winner on the night, winning the Four-year-Old Mares Pace in 1:52.0, rallying late to win by a neck over Pansy’s Image and Widger. Fully A Virgin and Michael Oosting finished third to make it an Indiana sired trifecta.

Rockin Nola is owned by JP Racing LLC and Sutton Bay Racing. Joey Putnam guided the divisional champion mare from 2019 for his father, Joe. The four-year-old Rockin Image mare was making her first start of 2020 and now has 12 wins in 28 starts with earnings of more than $435,000.

To kick things off at Harrah’s Hoosier Park earlier in the day was a performance by Priceless, the three-year-old standout filly from the Brandon Bates Stable. The Rockin Image filly won her qualifier by 14 and one-half lengths in 1:50.3, a final panel in :27.4. Kevin Miller and Bert Hochsprung own the champion filly who will make her 2020 racing debut soon.