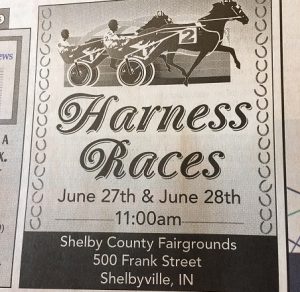 The Shelby County Fairgrounds has been advertising the Standardbred racing program for Thursday and Friday in local newspapers.

The very first race will feature an undefeated filly as Rock It Out seeks her third straight win for driver Clifton Bell and trainer Curtis Rice. The Rockin Image filly’s best performance was a 2:02.3 win at Converse.

Rock It Out will face ER Harper Rose from the Don Eash barn for the first time. The Riggins filly has two wins in three starts. Her only defeat was in a non-winners of one at Harrah’s Hoosier Park last week where she finished second by three-quarters of a length, pacing her mile in 1:57.4.

Rock It Out starts from post three while ER Harper Rose starts from the second tier in the far outside post position of seven.

Later in the card, Beach Boy’s Desire will look to keep his record perfect as he goes for his fourth straight win. Trained and driven by Richard Holsapple, the Real Desire gelding was a winner at Harrah’s Hoosier Park last week in 1:56.4. He starts from post five, which is the outside on the first tier, in race six.

Three-year-old trotting colts will be led by the super talented J-S Swanman, a winner in four of nine starts this season. From the Jack Myers Stables, the Swan for All horse’s best time was recorded at Harrah’s Hoosier Park in 1:56.1 with driver Alex Udell at the controls. J-S Swanman starts from post four in Race 13.