Harrah’s Hoosier Park will kick off the 26th season of Standardbred Racing Friday, March 29 with 14 races. A total of 128 horses have been entered for the season opener that includes eight races dedicated to the newly formed Claiming Challenge. 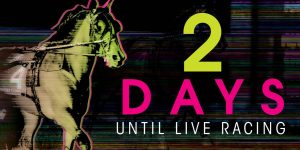 Complementing the opening night program will be numerous activities. The first 500 guests visiting Caesars Rewards on the racing side will receive a hooded sweatshirt. The evening will also kick off the first Fan-tastic Fridays of the year with $1 draft beer, hot dogs and programs when doors open at 5 p.m. The first race will line up behind the Todd Nixon starting gate at 6:30 p.m.

Also on the agenda will be five $100 Megabet drawings to place a $100 win wager on a select race. At the conclusion of racing, Stella Luna and The Satellites will perform in the Terrace Showroom.

“As soon as our athletes cross the finish line in the last race of the year, we hit the ground running for the upcoming season.” said Rick Moore, Harrah’s Hoosier Park vice president and general manager of racing. “We’ve planned our 2019 season with the mentality that everything has to be bigger, better, and bolder. We have a great weekend, and season ahead, and can’t wait to welcome back our race fans to celebrate another year of championship racing.”

Racing continues Saturday, March 30 with a 14-race card that includes five races in the Claiming Series along with two Open Trots.