Harrah’s Hoosier Park will kick off it’s 28th season of Standardbred racing Friday, March 26 with 14 races. The program begins at 6:30 p.m. and will feature a few early closers as well as a $20,000 Open Pace. 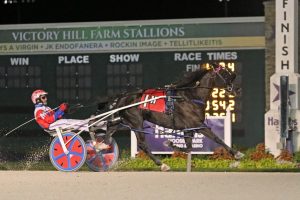 Family Recipe will be one of the favorites in the Open Pace featured on the opening night card Friday, March 26. The Always a Virgin son is shown winning at Harrah’s Hoosier Park with trainer-driver LeWayne Miller last year. Photo by Dean Gillette

Headlining the Open Pace is Indiana sired Family Recipe from the LeWayne Miller barn. The four-year-old son of Always a Virgin has won three of seven starts in 2021, including his last two starts at Miami Valley. Family Recipe is owned by Miller, Arnold Manders, Joe Vieira and Never 2 Late Stable. Miller will drive from post six in the seven-horse field.

Another major contender in the first Open Pace of the season in Indiana is the Ron Burke-trained The First Step from post seven. The five-year-old Betterthancheddar gelding has won four of eight starts this season with a best time of 1:51.0 taken at The Meadows. Ricky Macomber Jr. has been named to drive The First Step.

Fan of Terror from the Peter Redder barn is always a major threat in the Open Pace. Drawing post one, the Western Terror nine-year-old has five wins in 10 outings for 2021. Trace Tetrick will drive the veteran pacer, who has earned in excess of $541,000 in his career.

Mega Bet drawings, poster giveaways and handicapping contests will be offered on the opening night card. Also, the track will provide $1 hot dogs, wagers and programs along with discounted beer. The opening weekend celebration extends through Saturday, March 27 with more giveaways for fans.