The dominance of Little Rocket Man continued Friday, April 23 in the $20,000 Open Pace at Harrah’s Hoosier Park. Guided by John DeLong, Little Rocket Man picked up a new seasonal time in the win, stopping the timer in 1:49.1. 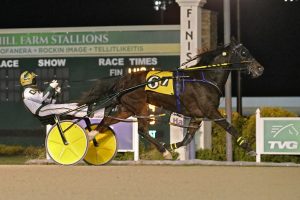 Little Rocket Man and John DeLong are now four for four in 2021 following their latest win in the Open Pace Friday, April 23. Photo by Dean Gillette

Starting from the outside post six, Little Rocket Man took his customary seat near the back of the pack as Family Recipe and LeWayne Miller set the first quarter in :26.3. It didn’t take long for the lead to change hands as Beaumond Hanover and Trace Tetrick let the way to the half in :53.4 and three-quarters in 1:22.0.  Little Rocket Man had been flushed out in the second half and was on the outside at the top of the stretch ready to challenge.

Pacing home in :27.1, Little Rocket Man soared to the lead and held off his opponents, winning by one length over Brassy Hanover and Sam Widger, who closed well for second. He’zzz A Wise Sky and Kyle Wilfong finished third.

Little Rocket Man was the second favorite of the field, paying $5.60 for the win. The Rockin Image five-year-old is owned by Russ Beeman and Jack Freeman and is trained by Missy Essig. The product of Victory Hill Farm of LaGrange, Ind. remains perfect in 2021 with four wins in four starts.

Also on the Friday card were a few Series Finals, including the $18,000 Jerry Landess Memorial with Certifiable and Trace Tetrick taking the title. The Rockin Image sophomore took over at the half and never looked back, scoring the win in 1:51.3. Saddle Up and John DeLong finished second over Caption This and LeWayne Miller for third.