The driving-training combination of Alex Udell and Jack Myers is loaded with two-year-old trotting talent in 2019. The duo combined for four wins in the freshman trotting ranks Thursday, June 13 at Converse. All four horses were repeat winners from the first session at Converse. 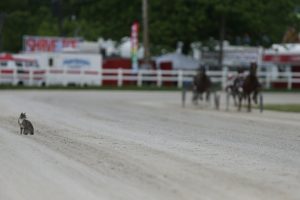 Udell and Myers first win was recorded in the second division of two-year-old trotting fillies as J-S Miss Ruby won by six lengths in a time of 2:10.3. The Jailhouse Jesse filly is owned by Jack Myers Racing Stable. Joining J-S Miss Ruby as a repeat winner is the Guccio daughter J-S Miss Carly. The freshman filly trotted home in :29.4 to win by 11 lengths in 2:07.3. J-S Jasper was an overwhelming winner in the second division of two-year-old colt and gelding trotters with a win by 22 and one-half lengths in a time of 2:03.4. Joining the Big Stick Lindy gelding as a winner on the day was J-S Ivan The Great, a son of Swan for All, who won his division in 2:10.3, to mark the fourth two-year-old trotter for Udell and Myers that is undefeated in two starts.

The always tough Don Eash Stable also had multiple winners on the card, including Whom Shall I Love from the first crop of trotting stallion Whom Shall I Fear. The two-year-old trotting filly, driven and trained by Eash, was an eight-plus length winner in 2:13.0. Eash also had winners in the three-year-old pacing ranks as ER Roxanne won her filly division in 2:04.2 and Letsmakithapncapn won a division of the sophomore pacing colts and geldings in 1:59.2.

Racing moves to the Harrison County Fairgrounds in Corydon on the next stop of the Indiana Sired Fair Circuit. The two-day program is set for Thursday, June 20 and Friday, June 21.