The Standardbred Horse Sale is underway at the Pennsylvania State Farm Show Arena. Last year’s event was moved to Maryland due to Covid-19 restrictions, but this year’s five-day event is back at its home, featuring 831 cataloged yearlings over the first three days of the sale. Included in the sale are nine yearlings with four set to enter the ring on Tuesday, Nov. 9. 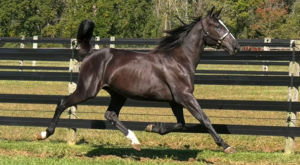 Just Show Up, a full sister to Measuredperfection, is one of four Indiana yearlings selling at Harrisburg Tuesday, Nov. 9.

Kicking off the Indiana portion of the sale is Hip No. 227, a Swan for All filly from the Concord Stud Farm consignment. The filly, named Semi Formal, is out of the Muscle Hill mare Blk Thai Optional, who has already produced two winners out east, Aela Jamieson (1:55.1, $109,000) and Cool Papa Bell (1:56.2, $58,000). The maternal family includes Anamosa Hanover, who was Two-Year-Old Trotting Filly of the Year in 1987 and a World Champion. The filly is dual eligible in Indiana and New Jersey and is staked to the Indiana Sires Stakes in addition to numerous Grand Circuit events.

Joining Semi Formal during Tuesday’s sale is Crown Hanover from the Hanover Shoe Farms consignment. The JK Endofanera colt, listed as Hip No. 232, is out of the mare Calgary Hanover, who earned in excess of $400,000 and was timed in 1:51.1 during her career. She has already produced two under the 1:50 time barrier.

Just Show Up will enter the ring as Hip No. 319. The Swan for All colt is out of the dam Kalibrated, who is the dam of Measuredperfection, an already proven Indiana Sires Stakes winner also by Swan for All with more than $347,000 in earnings. The family also includes Dr. Ronerail under the second dam, who earned over $700,000 during his career.

The final Indiana yearling headed to the ring Tuesday is Oh My Gosh, another colt by Swan for All. The colt is the third foal from Oh My Darlin, who has produced Capricornus, winner of more than $265,000 and more than that internationally. The second dam has produced Cedar Dove, three-year-old trotting filly of the year in 2011 and half sister to Oh My Gosh.