Indiana was well represented Friday, Jan. 22 with four winners recorded during the evening card at The Meadowlands. Rockin Panda, Gotwuteverittakes, Smooth Aceleration and Always Mindy represented four different Indiana sires as they won their respective events back to back. 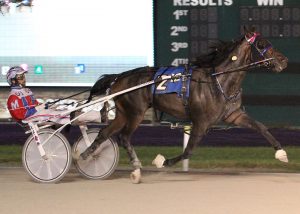 Gotwuteverittakes, shown with driver LeWayne Miller at Harrah’s Hoosier Park, was one of four winners on the card at The Meadowlands Friday, Jan. 22. Photo by Dean Gillette

Kicking off the night in the third race was Rockin Panda in the $7.600 conditioned pace. The eight-year-old son of Rockin Image pursued the lead early, getting the top spot after the quarter in :27.4 for driver Andrew McCarthy. From there, the gelding got a bit of a breather through middle fractions before pacing home in :29.4 for the win in 1:55.0. Rockin Panda was a length winner over Sharknado and George Napolitano Jr. followed by He’s Gratis N and Dexter Dunn for third. Bluebird Goldwyn, another son of Rockin Image, finished fourth in the mile.

Rockin Panda paid $9.20 for the win. He is trained by Jamie Gerard and owned by Strategic Racing Stable of Maine. Mervin Miller bred the gelding, who won his first race of 2021 and now has 16 career wins in 130 career starts with more than $172,000 in earnings. His career best time was taken at Dayton as a four-year-old in 1:52.1.

The fourth race also put the spotlight on an Indiana sired trotter as Gotwuteverittakes and Simon Allard scored a near gate to wire victory in the conditioned trot. Starting from post five, the five-year-old son of Bluto snagged the top spot after the first quarter in :29.1 and never looked back, pulling in the win in 1:54.3. He was a commanding winner, scoring the victory by nearly six lengths over Deplorable Tom and Mark MacDonald for second with Innisfallen and Scott Zeron finishing third.

Trained by Ricky Bucci, Gotwuteverittakes is now owned by Bucci and was bred by James Hilty of Fort Wayne, Ind.  He now has in excess of $150,000 with a mark of 1:53.0 as his career best taken last year at four. The win was the first of 2021 for the former Indiana Sires Stakes winner.

Swan for All gelding Smooth Aceleration was the next to visit the winner’s circle. The five-year-old gelding was flushed to the outside at the half in :56.3 and made his way to the leaders. Smooth Aceleration and Dexter Dunn made a bold challenge in the stretch to score the win by one length in 1:54.4 over favored Levitation and Yannick Gingras. Esa finished third for driver Mark MacDonald.

A surprise to bettors, Smooth Aceleration paid $11.40 for the win. He was bred by Victory Hill Farm and is owned by Clark Stables of New Jersey. Jenny Melander trains the gelding, who now has 10 career wins with earnings in excess of $139,000. He was only two ticks off of his career best, which remains at 1:54.2 taken at Harrah’s Philadelphia as a three-year-old.

The final Indiana winner was pacing mare Always Mindy. Trained by Jaymes McAssey, the Always a Virgin seven-year-old never saw the inside rail, parked on the outside from the start home. McCarthy moved the mare four-wide in the final turn and had moved into position to challenge at the top of the stretch. Always Mindy used the entire length of the stretch to get by opponents, winning by a head at the wire in 1:53.2 over Lady Rocknrolla A and Dexter Dunn. Juxta Cowgirl and Andy Miller finished third.

Always Mindy, a daughter of standout Indiana Sires Stakes champion mare Marks-Mindy, paid $17.60 for the win. She is owned by Greg Gardner of Sheridan, Mich. and was bred by John Miller of Topeka, Ind. Always Mindy, by Always a Virgin, now has 20 career wins in 110 career starts with more than $172,000 in earnings. Her career best time was taken last year at Plainridge in 1:52.2.