It was a night of old-timers at The  Downs at Mohegan Sun as four winners on the card were Indiana sired products. Royal Heart, Bay Rum, Horsing Around, and Mister Indiana all made their way to the winner’s circle, three of which were in the Game of Claims Pacing Series. 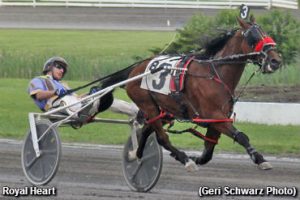 Royal Heart was one of four Indiana sired horses who scored a win at Pocono Downs Sat. Feb. 22. Photo by Gen Schwartz

Kicking off the evening was Royal Heart, a nine-year-old son of Royal Art. Bred by Genesis Trotters, Royal Heart had good early positioning on the front before being overtaken before the half by Always A Diamond, another Indiana sired nine-year-old by Always A Virgin. Royal Heart followed Always A Diamond’s lead to the stretch and scored the win by one and one-half lengths in 1:54.0 with Simon Allard at the controls. Always a Diamond was second with Anthony Napolitano driving. Rene Allard, who is also the trainer, owns Royal Heart, who is closing in on $500.000 in career earnings.

The second Indiana winner of the night was Bay Rum, in a gate to wire win by one and three-quarter lengths in 1:52.2 for driver Tyler Buter. The seven-year-old Real Desire gelding, owned by Connie and Jay Hochstetler and Finkleberg Racing, has in excess of $130,000 in career earnings.

Allard’s were back in the winner’s circle with another Indiana sired horse in the Game of Claims Series in the fifth race of the night as Horsing Around was a strong winner by six and one-quarter lengths in 1:51.1. The six-year-old son of Shadyshark Hanover wired the field for his third win of the year. His time was also a new career best. Bred by Michael and Randy Wilt, Horsing Around was claimed out of the race.

The final Indiana winner of the night was also a Game of Claims Series winner. Mister Indiana, an eight-year-old son of Quality Western bred by Larry Smith, held on gamely for the win by a nose in 1:52.3. Driven by Matt Kakaley, the longshot winner paid $18.20 in his second win of 2020 and his 13th overall. His career best time still stands at 1:50.0 taken at Harrah’s Hoosier Park as a five-year-old. Michael Posner now trains the gelding for owner Austin Siegelman.