Racing has resumed at Hawthorne Racecourse in Chicago and several Indiana sired horses were in the winner’s circle on opening weekend. Included on the list of winners was Always A Law, who won the $9,200 conditioned pace for driver-trainer Todd Warren. 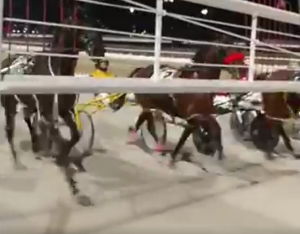 Starting from post four, Always a Law slid over to the rail as Shadyman and Tyler Shehan set the pace. Always A Law was out and rolling around the final turn and took over late in the stretch for the win in 1:54.0, final quarter in :26.4. Lying In Cash and Travis Seekman finished second over Shadyman.

Always A Law is owned by Wilson Racing Stable Inc., Ann Calvert and Mark Eichberger. The four-year-old son of Always A Virgin was bred by Elmer Yoder. It was the first win of the season in only the second start for Always A Law, who took his career best time at Harrah’s Hoosier Park last fall in 1:53.1.

Another Indiana sired winner on the card was Buff’s Image from the Hector Herrera Stable. Driven by Brandon Bates, the seven-year-old gelded son of Rockin Image was a near gate to wire winner in 1:54.3. Owned by Garcia Power Inc., Walnut Creek Farm is the breeder. It was one of three wins on the card for Bates.

Be Magical also scored a win for the Wilfong family in the seventh race of the night. The Cherry Hill Park four-year-old mare was in the mix early on and retook control in the stretch for the win in 2:01.4 with Kyle Wilfong at the controls. Trained by Brett Wilfong, Be Magical is owned by Lynn and Barbara Wilfong along with Brett and Candice Wilfong. Lynn and Brett are the breeders.

It was the first win in the first start of 2020 for Be Magical. She now has three career wins and took her career best mark of 1:59.1 at Harrah’s Hoosier Park last fall.

Sir Mammo rounded out the representation from Indiana with a win in the ninth race. The Sand Shooter eight-year-old gelding scored the win in 1:53.0 for Warren and trainer Ronnie Roberts. La Bella Vita Stables owns the gelding, who was an upset winner to pay $19.40 for the win.