After sweeping the three legs of the Hiteman Series at Miami Valley Raceway, Hamsandwich was back in the winner’s circle Saturday, Feb. 27 to kick off the George Williams Series. Driven by Trace Tetrick, who is at the top of the list for drivers this season, Hamsandwich scored the win in 1:51.4, a new lifetime mark. 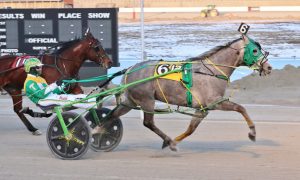 Hamsandwich and Trace Tetrick are shown winning the Hiteman Series Final at Miami Valley Raceway Feb. 22. They kicked off the George Williams Series Sat. Feb. 27 with a win, also. Photo by Conrad Photography

Starting from post three, Hamsandwich used early speed to get good positioning but was passed up at the first quarter by Nassau Desire and Chris Page. Once they were settled on the top, Tetrick pulled Hamsandwich back out and around to the top, securing the spot by the half in :56.1. From there, he kept the field at his heels, posting the three-quarter mile time in 1:24.1 before rolling home in :27.3 for the win. E Mode’s Desire, another Indiana sired pacer, finished second for trainer-driver Mike Peterson while Rhythm or Ryan and Dan Noble finished third.

Hamsandwich is owned and trained by Adam Short of Xenia, Ohio. He has owned the Indiana sired gelding since early October.  Dustin and Sherri Heinzen and Chad Clark bred the roan four-year-old by Tellitlikeitis.  He now has eight career wins in 21 starts and is nearing $50,000 in earnings.

Earlier in the card, Indiana sired My Wish Came True won a division of the Williams Series. Starting from post four, he moved to the lead at the half in :55.3 and held strong to the wire for driver Brett Miller, winning by three-quarters of a length in 1:51.2. Shvaiko and Tony Hall finished second over Play Me Rock and Trevor Smith for third.

It was the second win of the year for My Wish Came True. His win was also a new career best for his connections and he now has more than $30,000 in earnings for his career.