Dean Ehrgott of Camby, Ind., was the top player in the first Caesars Rewards Handicapping Challenge Saturday, June 22 held at four Caesars racing properties, including Harrah’s Hoosier Park. Ehrgott, who played at Indiana Grand, won the $20,000 first prize by the margin of 40 cents over second place finisher Paul Napoli, who participated at Harrah’s Philadelphia and earned $10,000 in the contest. 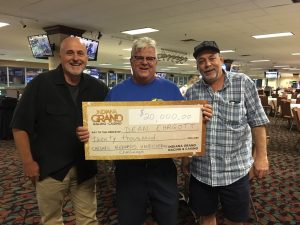 Ehrgott, a former Standardbred owner in the state of Indiana, credited his friends, Greg Gass and Deniz Sidkey, for helping him get to the top of the leaderboard. He was visible in the top 10 standings throughout the contest and was able to select the second place finisher in the final race offered to complete the challenge with a bankroll of $129.00 and take home the top prize. Napoli had an accumulated total of $128.60 in second place while Frederick Nielsen, also of Harrah’s Philadelphia, finished third with a balance of $127.00 to earn the $1,500 third place prize. Erghott’s second entry finished fourth with a $107.80 tally. Places four through 10 received $500 each.

“I got lucky and hit three races that paid pretty good at Philly (Harrah’s Philadelphia),” said Ehrgott. “I’m a harness guy, so going into the last race, I got help from my Thoroughbred guy and I selected the one (Chief Red Bull). He finished second and paid $3.40, which was just enough to move me into the lead.”

Ehrgott was associated with Standardbred racing for decades before he sold his last horse in 2016. His most noted winner was Radar Contact, the Indiana sired mare who earned nearly $1 million during her career and won 34 races. He still stays connected to racing through playing in handicapping contests across the nation with Gass and Sidkey.

“We play a lot in these types of contests,” added Ehrgott. “We play in the Santa Anita Breeders Cup $10,000 Challenge every year. We have a lot of fun traveling around.”

In addition to his $20,000 top prize, Ehrgott will also receive a seat in the 2020 National Horseplayers Championship (NHC) in Las Vegas. And, if he should win the 2020 NHC, Ehrgott would earn a $1 million bonus provided by the Caesars Rewards Handicapping Challenge.

“It sure was an exciting finish for the Caesars Rewards Handicapping Challenge and it came down to the wire,” said Rick Moore, vice president and general manager of racing at Harrah’s Hoosier Park. “Only 40 cents separated the winner and the second-place finisher. It was a tough competition throughout.”