(The following is part of a press release from the Indiana Business Journal printed Wednesday, Nov. 28, 2018)

Former Centaur Gaming executives have created a new business to acquire two casinos in northwest Indiana, and have plans to relocate both gaming licenses. 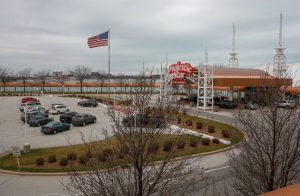 Centaur sold its two horse track casinos near Indianapolis—Hoosier Park in Anderson and Indiana Grand in Shelbyville—to Las Vegas-based Caesars Entertainment Corp. earlier this year for $1.7 billion. The two racinos are among the biggest in the state, with Indiana Grand seeing nearly $276 million in total “win,” which is gambling revenue after payouts, in fiscal year 2018, and Hoosier Park generating about $209 million in total win.

To reverse the trend, Spectacle will try to relocate one casino within Gary and move the other license somewhere else in the state, but an exact location has not been determined. The relocations would require approval from the Indiana General Assembly.

Ratcliff and Greg Gibson, an entrepreneur from Terre Haute who will serve as vice chairman of Spectacle, are the principal investors.

The transaction, which requires regulatory approval from the Indiana Gaming Commission, is expected to close in the first quarter of 2019.