Forever Jesse, the Indiana sired son by Jailhouse Jesse, lit up the tote board Thursday, Feb. 10 in conditioned trotting action at Miami Valley Raceway. Driven by Chris Page, the gelding was a longshot in the field of nine. 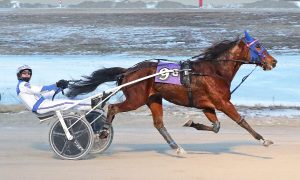 Starting from the outside post nine, Forever Jesse was on a mission when the gate folded, sprinting to the lead and setting the first fraction in :28.2. He was able to get a breather during the middle portion of the race in :58.1 and 1:27.2 as the second tier came up to him to challenge.

In the stretch, Forever Jesse pulled away by open lengths before the late closers began to attack. Shake it Mary and Trace Tetrick had the most momentum and got within a half-length of Forever Jesse, but couldn’t overtake him for the win in 1:57.4. Thruway and Josh Sutton finished third. All three top finishers were 5-1 odds or higher for big payouts on the board.

Forever Jesse paid $32.40 for the win. The six-year-old gelding is trained by Shawn Barker II and is owned by Scott Albaugh and Bradley Delaney. James and Dudley Thompson of Kentucky bred the horse, who earned his first win in his fifth start of 2022.

Forever Jesse now has 18 career wins in 78 career starts with earnings of more than $120,000. His quickest mile was recorded last year at five at Scioto Downs in 1:54.4. He has been with his current connections since last September.

Also on the Thursday card was a win by ER Rocky in conditioned claiming action. Driven by Trace Tetrick, the four-year-old Aracache Hanover gelding turned in a gate to wire performance as the favorite of the field, stopping the timer in 1:52.2. Always Virgil, also an Indiana sired gelding, and Josh Sutton finished second over Third Edition and Sam Widger for third.

ER Rocky is trained by Trent Stohler and owned by Trent Stohler Stable, Ben Graber and Tim Graber. Eash Racing Stable bred the gelding, who is now two for four in 2022. Overall, he has nine wins in 44 starts. His career best time was taken last year at three in 1:50.3 at Harrah’s Hoosier Park.