Foiled Again, the world champion pacer and winner of more than $7.6 million, will include a stop at Hoosier Park on his 2018 Farewell Tour Friday, Nov. 2. The 14-year-old son of Dragon Again, a three-time Horse of the Year, has been touring the United States this season, giving a lot of fans the opportunity to see the great pacer race one last time before he moves into forced retirement when he turns 15 Jan. 1, 2019. 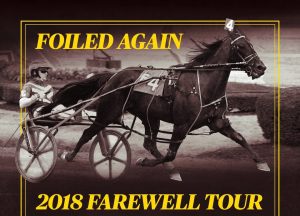 Trained by Ron Burke, Foiled Again has made 21 starts this year at 14 different tracks, including several county fairs, and he’s not done yet. The big impressive powerhouse veteran will lead the post parade for the Breeders Crown at The Downs at Mohegan Sun Saturday, Oct. 27 before heading to Plainridge Racecourse Tuesday, Oct. 30. His next stop will be at Hoosier Park Friday, Nov. 2 as part of a special stakes night featuring the $200,000 Monument Circle, the $200,000 Carl Erskine, the $100,000 USS Indianapolis Memorial and the $100,000 Crossroads of America stakes.

Additional stops for Foiled Again on his farewell tour includes Dayton Raceway (Nov. 10), The Meadowlands (Nov. 24), Harrah’s Philadelphia (Dec. 9), Woodbine/Mohawk (Dec. 22) and his final appearance at his home track, the Meadows on Dec. 31.

During his tour, Foiled Again is driven by local horsemen at various locations, also providing a thrill to drivers who do not normally have the opportunity to drive a great horse. Ten different drivers have guided Foiled Again this year.

Foiled Again will retire with more than 325 starts and at least 105 wins. He took his best mark as a nine-year-old at Pocono Downs in 1:48.0 for owners Burke Racing Stable, Weaver Bruscemi and JJK Stables.

Hoosier Park invites all racing fans to join them in saluting a true champion as Foiled Again joins the excitement of racing Friday, Nov. 2.