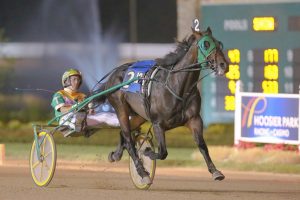 Starting from the second tier post nine, Fly Jesse Fly was unhurried at the start as Some More Prince and Ryan Stahl set early fractions of :27.1 and :56.2. Fly Jesse Fly was able to flush some cover to inch closer to the front during the second half of the race. In the stretch, he trotted home in :29.2 to win by one and one-quarter lengths over Some More Prince. Outburst and Chris Page finished third.

Fly Jesse Fly is owned by Robert Sidley and Jim Otto of Ohio. Otto also serves as the trainer of the gelding, who now has 31 wins in 126 starts. It was his fourth win of the year and he now has in excess of $550,000 in career earnings. Fly Jesse Fly took his career best time of 1:53.1 at Northfield Park last season.  The trotter was bred by Sidley.

Ohio was the first state to get back to racing following Covid-19 restrictions. Harrah’s Hoosier Park will follow suit and kick off its 27th season of Standardbred racing Tuesday, June 16. First post is 6:30 p.m. featuring a 14-race card.