Several stables that wintered in the south have returned to the Hoosier State and had good showings at the qualifiers at Harrah’s Hoosier Park Tuesday, June 2. Woodside Datendiva from the Erv Miller Stable picked up a win during the 10-race card. 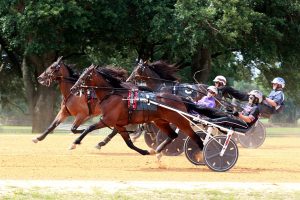 Woodside Datendiva (inside with Atlee Bender) turned in some qualifiers in Florida before shipping to Indiana recently and winning her first qualifier at Harrah’s Hoosier Park Tuesday, June 2. Photo by Senni Vilander

A three-year-old daughter of Guccio, Woodside Datendiva followed J-S Miss Carly out of the gate and settled in second as J-S Miss Carly and Alex Udell established early fractions of :28.4, 1:00.0 and 1:30.1 before tipping out to challenge. Coming down the stretch, Woodside Datendiva took a cue from Tetrick for more speed and rallied home in :27.4 to secure the win by a neck over J-S Miss Carly. Exconvict and Andy Shetler finished third to make it an Indiana sired trifecta in a time of 1:58.3.

Owned by Ervin Miller Stable and Robert McCormick, Woodside Datendiva had three wins last season and took a two-year-old mark of 1:56.3. Her efforts in the Hoosier Park qualifier was her first winning effort in three starts this season. She had two previous qualifiers at Southern Oaks Trotting Center.  Atlee Bender drove her in both of her Florida outings. Lester Beechy of Wolcottville, Ind. is the breeder on the filly who was a $14,500 yearling purchase from the Hoosier Classic Yearling Sale in 2018.

Miller had two other winners on the day. Both driven by James Yoder, Anchors Away, a three-year-old son of Whom Shall I Fear, earned a win by 10 ¼ lengths over J-S Miss Ruby and Alex Udell in a time of 1:59.2. Fox Valley Hustler, a sophomore son of Time to Roll, edged out Frankiepark and Ricky Macomber Jr. for a win in 1:56.0.

Another impressive winner that recently shipped up from Florida was Bluebird Keepsake from the Wrenn Racing Stable. The three-year-old Swan for All filly went straight to the lead for Peter Wrenn and earned the win in 1:58.4, three-quarters of a length ahead of Act of Faith and Sam Widger. RJZ First lady and LeWayne Miller finished third.

Bluebird Keepsake was the sale topper during the 2018 Hoosier Classic Yearling Sale at a price of $125,000. She was bred by Daryl Miller of Middlebury, Ind. She was unraced at two and has already been impressive this season, winning her last three qualifiers, two of which were in Florida at Sunshine Meadows before shipping to Indiana.