The Indiana Sires Stakes (ISS) for two-year-old trotting fillies were featured on the program Wednesday, July 14 at Harrah’s Hoosier Park. A total of three divisions were carded for the first leg of action. 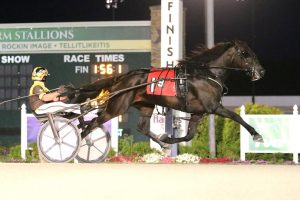 The quickest winner of the three was Fleurie, trained by Melanie Wrenn. The Muscle Massive filly, driven by Michael Oosting, got away third in the field of eight from post one as Tabsladyone and Ricky Macomber Jr. set the tempo with fractions of :28.1 and :57.2. Around the final turn, Fleurie was flushed out to challenge and was able to take over at the top of the stretch.

Fleurie trotted home in :28.2 before grabbing the win in 1:56.1. Miss Spicy finished two lengths back in second for driver Trace Tetrick while Ally Ally in Free and Brandon Bates finished third. All three horses were not favored in the event with big prices posted on the board led by Fleurie, who paid $10.80 for the win.

Fleurie is owned by M T Pockets Stables of Florida. They also bred the freshman, who is now two for two in her brief career. The mile also marked a new career best for her credentials.

Joining Fleurie as a winner in the first round of the ISS was M-M’s Dream from the Henry Graber Stable. Driven by Sam Widger, the Swan for All filly got away with good speed along the inside as Macy and James Yoder pressed to the lead at the quarter in :29.0. From there, M-M’s Dream moved around to the front spot and led the way to the stretch before R Desireable Lady and Trace Tetrick moved up to take over.

In the stretch, M-M’s Dream came back and trotted home in :27.4 for the win in 1:57.1. R Desireable Lady finished two and one-quarter lengths back in second followed by Swan’s Eye and John DeLong for third. All three top fillies are products of Swan for All.

The final division of ISS action was won by Flipflopsncroptops from the Erv Miller Stable. The filly was favored in the field and led gate to wire for the three-length win in 1:58.1 for driver Trace Tetrick. Sunafterthestorm and James Yoder finished second followed by Walk With Me and Doug Rideout for third.

Flipflopsncroptops is owned by Kentuckiana Racing Stable, S & R Racing Stables and George Golemes. Kentuckiana Farms bred the filly, who earned her first career trip to the winner’s circle in only her second career start. She is the first foal from the mare Sweet Summer, who is by Muscle Mass.