Fast Freddy Jo Jo stood out as a two and three-year-old on the Indiana Sired Fair Circuit, partly because of his name. Now, the chestnut gelding with white stockings is showing his skills on the pari-mutuel level at Miami Valley. The five-year-old gelding got a perfect trip to score an upset win in 1:51.2 in the $12,500 conditioned claimer. 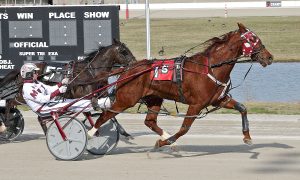 Starting from the inside post, Fast Freddy Jo Jo and Cameron McCown got away well from the gate and secured the spot right behind race leader He’s A Dickens and Brett Miller. They followed along through fractions of :27.0, :55.2 and 1:22.3. In the stretch, Fast Freddy Jo Jo pulled out and paced home in :28.3 to score the win over He’s A Dickens. Reigning Bills and Josh Sutton finished third.

Fast Freddy Jo Jo paid $33.20 for the win. He is owned and trained by Jessica McCown. Richard Fry bred the son of Time to Roll. It was his second win of 2022 and a new lifetime mark. Overall, he has 20 wins in 53 starts and earnings over $65,000. The McCowns acquired him in early February of this year. Since moving him into their barn, he has hit the board in all six starts with both wins recorded since the move. He is the last foal from The Panderosa mare O Lucky Me who has a mark of 1:54.0 and more than $120,000. He is a half brother to MJ’s Reflection, who is still racing and has a mark of 1:53.2.

Another Indiana winner on the Monday, April 5 racing card at Miami Valley was Foxy Fiji, a four-year-old mare from the Rachel Oenema Stable. The JK Endofanera four-year-old was a winner in 1:53.2 with Chris Page at the controls. Foxy Fiji now has four wins in five starts this year for Rising Stein Stables of Ohio. Fox Valley Standardbreds bred the mare who has accumulated more than $75,000 in earnings after not beginning her racing career until last year at three.