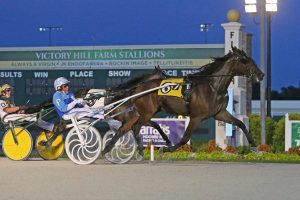 Flagman and trainer-driver Rick Plano captured their first win of the season in the fourth round of Indiana Sires Stakes action Thursday, Aug. 20. Photo by Dean Gillette

In the first division, Flagman and trainer-driver Rick Plano left the gate quickly for the top spot, grabbing the first quarter in :27.2 before being overtaken by Anchors Away and Trace Tetrick. The duo sat patiently in the two-hole behind Anchors Away until the stretch. Plano tipped Flagman out to challenge, hooking up with race favorite Dude Included and John DeLong in the process. Flagman was able to endure the stretch drive for the win by three-quarters of a length in 1:54.1, a final panel trotted in :28.1. Dude Included finished second over Speed Ball Swagger and LeWayne Miller for third.

Flagman was a bit of a surprise to bettors, paying $17.20, $4.00, $6.40 across the board. The gelded son of Guccio is owned by Cinderella Stables of New York. Bred by Pond-A-Acres, Flagman earned his first win of the year and added a new career best time to his credentials. He now has in excess of $73,000 in earnings. He was a $14,000 purchase from the Hoosier Classic Yearling Sale in 2018.

Emma Town Bud had a tough task ahead of him in Indiana Sires Stakes action as he was going up against Swan in Motion, who was a perfect five for five this season heading into the race. But the Big Stick Lindy gelding was up for the task, earning a win in the second division in 1:52.4.

Starting from post six, Emma Town Bud and Michael Oosting used enough speed to get to the two-hole behind early race leader TJ’s Top Pick and Trace Tetrick. The tempo was quick but even to the top of the stretch, allowing Emma Town Bud to find a clear lane toward the finish line.

In the stretch, Emma Town Bud got the lead early, but Swan in Motion and Ricky Macomber Jr. were closing in toward the leaders. Emma Town Bud was able to keep his advantage at the finish line, winning by two and one-half lengths with a final quarter in :27.1. Swan in Motion finished second over TJ’s Top Pick.

Emma Town Bud is owned by Summit Pacing Acres and trained by Byron Hooley. He paid $6.20, $2.40, $2.10 across the board. It marked the second straight win, piecing the Sires Stakes victory together with a win in the $31,502 Horsemen Stake at the Indiana State Fairgrounds a week before. Prior to that, Emma Town Bud was a second place finisher to Swan in Motion in the third leg of Indiana Sires Stakes action. Emma Town Bud was bred by Mervin D. Lehman of Topeka, Ind.