It was another successful day for the Conrad Stable Saturday, Sept. 7 as Charlie Conrad scored five wins as a driver, two of which came from his stable. A total of 22 races were contested as the Indiana Sired Fair Circuit (ISFC) continued. 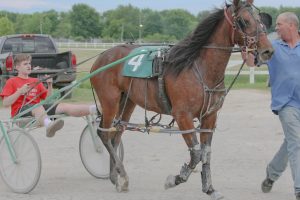 Saltwater Gospel, guided by Carson Conrad earlier this year at Frankfort, was one of five driving wins for Charlie Conrad Saturday, Sept. 7. Photo by Dean Gillette

Conrad’s day started off with two wins in the two-year-old filly pacing divisions from his stable. Saltwater Gospel rallied home in the first division for a win by one and one-quarter lengths in a time of 2:02.2. the Bring On the Beach filly is a homebred still owned by breeders Diamond H Racing Stable and Steve Carter.

Stablemate Donttellmetosmile scored a win in the second division in a time of 2:02.4 with a gate to wire effort. The Tellitlikeitis filly, owned by Sarah, Carson and Carder Conrad, is now two for three in her racing career that just got started in recent weeks. The time of 2:02.4. was her quickest to date.

When freshman pacing colts and geldings hit the track, Conrad was back in the winner’s circle with Always Evidence. The Always a Virgin colt, owned and trained by Christopher Hope, advanced in the stretch to nab the win by a nose over Panther Time in 1:59.4.

The first division of two-year-old filly trotters was also won by Conrad as Just for Us, owned and trained by Bonnie Mattingly, rallied out to a commanding lead early and sustained her position to the wire in 2:06.1.

The final win of the day came with the Brian Barnes-trained Farmer’s Tan. After making a break before the start, Farmer’s Tan got on the front and fended off This or That and Jay Cross for the win by one-half length in 2:01.1. Owned by Diamond H Racing Stable, the Always A Virgin sophomore pacing gelding scored his second win of 2019.