The second round of racing at Converse, Ind. took place Wednesday, June 12, giving a few of Indiana’s latest newcomers a chance at repeat performances. One of those winners included two-year-old pacing gelding Fishyriggins of the Zach Miller Stable, which is based at the Converse Fairgrounds. 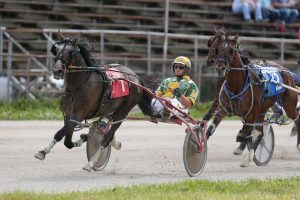 Fishyriggins turns in a gate to wire win on his hometrack at Converse Wednesday, June 12. The Riggins gelding is now two for two for driver-trainer Zach Miller. Photo by Dean Gillette

Owned by Miller and Mike Hollenback, Fishyriggins rallied straight out to the lead and kept four contenders at his heels, rallying home in :29.1 to win by one and three-quarter lengths in a time of 2:02.1. Townline Flight and Matt Rheinheimer finished second followed by Timetorollthedice and Jordan Ross for third.

Fishyriggins, who shows glimpses of Whitefish Falls grey coloring in his coat from his dam’s side, won his first career start last week in 2:01.4. The gelding, who was a $6,000 purchase from the Blooded Horse Sale as a yearling, was bred by Steve Wagler.

Miller also connected with two-year-old filly Skyway Venus earlier on the 20-race card. The Time to Roll filly was a gate to wire winner in a time of 2:04.4.

Doug Rideout had a pair of winners in the two-year-old pacing divisions. Rockin In the Deep, a filly by Rockin Image, won in 2:04.4 followed by Cherokee Gorgeous, a gelded son of He’s Gorgeous, was a winner in 2:03.3.

Clifton Bell and Curtis Rice also had a driving and training double, respectively. The duo won with the Always A Virgin filly Tropical Tracey in a division of the two-year-old filly pace in 2:01.3 along with a win from Rock It Out, a daughter of Rockin Image, who stopped the timer in 2:02.3 with an impressive final panel in :28.0.

Alex Udell and Jack Myers completed the day with a sweep among three-year-old trotting colts and geldings. Jesse Popper (2:00.1), J-S Power Chip (2:02.3) and J-S Swanman (2:01.3) were all winners for the Myers Racing Stable.