First Turn Stable, the fractional ownership program offered at Harrah’s Hoosier Park, earned a win in their very first start with their new acquisition Friday, July 30. Trained by Missy Essig, Francis Underwood earned a win for the group fresh off a claim in the previous start July 23. 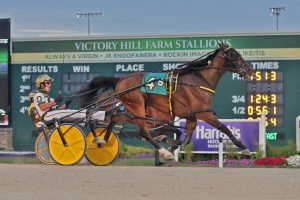 Starting from post four, driver John DeLong took Francis Underwood over to the inside pylons and got away in mid pack as Roll With Jr. and Ricky Macomber Jr. rolled to the lead and through the first quarter in :26.4. The lead changed to Hoosier Celebrity and Brandon Bates through the half in :56.1 and the three-quarters in 1:24.3. Francis Underwood was flushed out around the final turn and was sitting in second on the outside for the stretch drive.

In the stretch, Francis Underwood hit another gear and sprinted home in :26.4 to win by three-quarters of a length over Gotham Hanover and Michael Oosting. JoJo’s Amadeus and LeWayne Miller finished third. The time of the mile was 1:51.3, just two ticks off Francis Underwood’s career best.

Francis Underwood was greeted in the winner’s circle by members of First Turn Stable, who came out in numbers to watch their new acquisition make its first start for the group. It was the second win of the season for Francis Underwood, who is now seven for 36 in her career and has earnings of nearly $70,000.

Francis Underwood was bred by Jerry Graham, who owned the horse until the claim last week. The Time to Roll gelding is now four-years old and has been a consistent performer since beginning his career at two. The Indiana sired gelding comes from a long line of winners. His dam, One Sure Thing, is a 100 percent producing mare with all 10 of her foals of racing age making it to the races. Her quickest is Mahdi, by Ft Apache Hanover, who took a mark of 1:49.3. She also has a pair of Henry Clay foals (Little Miss Henry and Big Brad) who each have earned in excess of $340,000 in their careers. She also has a two-year-old this season named Sure Thing Herman, who is a gelded son of Tellitlikeitis. He has made two qualifying starts with Trace Tetrick in the bike for trainer Erv Miller.