First Turn Stables is ready for action in 2019 with its latest purchase, King Leonidas. The eight-year-old son of Always A Virgin was claimed for a tag of $10,000 Friday, May 3 by the fractional ownership stable, which is trained by Jamie Macomber. 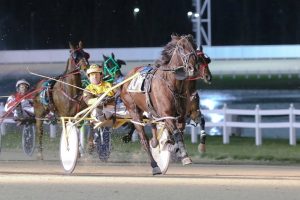 King Leonidas hasn’t missed a beat since starting his career as a two-year-old. The Indiana sired gelding has been a consistent performer, finding his best stride at the age of six with 10 wins that season. He recently took a new lifetime mark of 1:52.0 and now has more than $160,000 in purse earnings as First Turn Stable takes ownership.

Last year, First Turn Stable owned two horses during the 160-day meet at Harrah’s Hoosier Park. They had three wins in 20 starts. The stable won four races in 2017 and during the inaugural season in 2016, they traveled to the winner’s circle five times with four separate horses.

First Turn Stable is a program designed to provide racehorse ownership to a group of individuals that have never owned a horse before. The affordable program requires a one-time buy-in fee and fans get numerous advantages of being an owner, from visiting the horse in the barn area to free perks on race nights.