First Turn Stable back in business for 2020

A delay to the start of the 2020 racing season at Harrah’s Hoosier Park also put the return of the track’s fractional ownership in question, but First Turn Stable is back in business for the year with Bay Rum making his first start Friday, July 31. 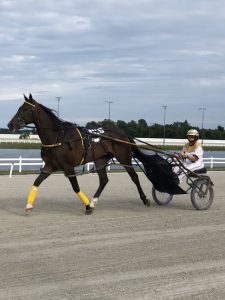 Bay Rum, a seven-year-old Indiana sired son of Real Desire, joined the Melissa Essig Stable through a claim July 24. It is the first year the stable has been managed by Essig, who oversees a string of horses on the backstretch at Harrah’s Hoosier Park, including the standout pacer Little Rocket Man.

Bay Rum, driven by LeWayne Miller, didn’t have any luck in his first start for First Turn Stable Friday, July 31. The $20,000 claimer sat in mid pack and could not gain any ground late in the race, despite closing in :28.3 and finishing his mile in 1:52.2.

Bay Rum began his career under the care of the Jim Mulinix Stable in Indiana as a two-year-old, but raced primarily on the East Coast beginning at three until this season. He has 22 career wins in 115 lifetime starts with a career best time of 1:51.2 set at The Meadowlands as a five-year-old. He nearly equaled that mark earlier this season at Harrah’s Hoosier Park with a win in 1:51.3. His earnings topple over the $135,000 mark.