It wasn’t the warm welcome expected, but qualifiers pressed on at Harrah’s Hoosier Park Saturday, March 14. A total of nine races were held through a driving snowstorm with the first race of the day featuring Breeders Crown champ Beckhams Z Tam. 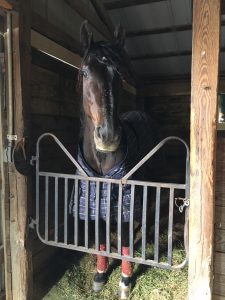 Beckhams Z Tam was relaxing in his stall after his 2020 qualifying debut at Harrah’s Hoosier Park Saturday, March 14. Photo by Tammy Knox

Trained by Jamie Macomber, Beckhams Z Tam, with Ricky Macomber Jr. driving, was making his 2020 debut and went out for an early lead through the first quarter in :27.4. World On Edge and Sam Widger moved up from the outside and eventually took control of the lead past the half in :58.0 before Beckhams Z Tam was again in control of the top for the stretch drive. The six-year-old Always A Virgin horse paced home in an impressive :26.0 to score the win in 1:53.3. World on Edge finished second over Threeofthebest A and Trace Tetrick for third.

Owned by Z Tam Stables LLC of New York, Beckhams Z Tam enters his fifth season of racing with nearly $800,000 in career earnings. He was bred by Lavon Miller.

Later in the day Saturday, Harrah’s Hoosier Park and the Indiana Horse Racing Commission announced that all casino and OTB operations would cease beginning at 6 a.m. Monday, March 16. No other horses will be allowed to ship in to Harrah’s Hoosier Park until at least March 30. The track will stay open for training for those already stabled on the grounds. More details will be released as soon as they are available regarding the 2020 racing season.