The first of six issues set for 2020 of the Indiana Standardbred Magazine is now arriving in homes. The 68-page March edition offers a lot of information for the upcoming racing season in Indiana for both the pari-mutuel circuit as well as county fair racing. 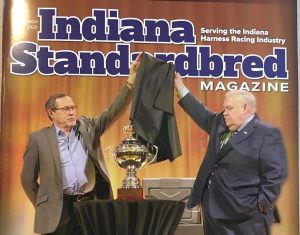 The first issue of 2020 of the Indiana Standardbred Magazine is now arriving in homes. To receive the magazine, simply become a member of the ISA for $25 per year, which will include the magazine.

Featured on the cover is a look at the new Governor’s Cup, which will now be presented to all winners of the Indiana Sired Fair Circuit (ISFC) Championships held at the Indiana State Fair. Mike McDaniel and Richard Keaton unveiled the new trophy during the banquet. Each division has been renamed to reflect the Governor’s Cup and will also see a purse increase to $25,000.

The issue also includes coverage of the Indiana Standardbred Awards Banquet in late January. A total of 11 pages are dedicated to the celebration of last year’s top performers.

Other stories in the issue include a look at retired racehorse Now Famous, who is now serving as a therapy horse at Morning Dove Therapeutic Riding Center in Zionsville, early renovation plans and photos of the track kitchen at Harrah’s Hoosier Park and a fun story on classic Cigar Boxes named and branded in honor of some of the sport’s best racehorses at the turn of the 1900s. Also in the magazine are numerous pages for the late closers, stakes, Elite races and ISFC.

The next issue of the ISA Magazine will be produced in early May. Other issues for 2020 include an issue in July, October, November, which is a special Breeders Crown edition, and December.

The ISA Magazine is always looking for leads on stories. If you have an idea to add, please contact Tammy Knox at tammyknox@ymail.com.