There are several new sires in the state of Indiana and one that is capturing a lot of attention is Riggins. The impressive son of Art Major has his first Indiana crop on the track this year and has seen success at both the pari-mutuel and Indiana Sired Fair Circuit (ISFC) ranks. 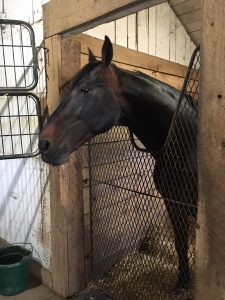 Riggins, one of several first crop sires in Indiana this season, is currently stabled at the Shelby County Fairgrounds. The impressive looking son of Art Major is part of the Allen Barn.

One of the most successful products thus far is the Brian Brown-trained Foxy Rigger, purchased from the Buckeye Classic Yearling Sale for $5,000. Foxy Rigger is currently three for three with a best time of 1:52.0 taken at Harrah’s Hoosier Park in late July. The filly was bred by Wilker Family Farms in St. Marys Ohio and is owned by Country Club Acres, Inc., L & H Management Services, Lombardo/Green Racing and Tim Lane all of Ohio.

On the ISFC schedule, Townline Jated from the Jay Cross barn was an impressive winner in his last start at the Indiana State Fair in the $20,000 ISF Championships for two-year-old pacing colts. The gelding is now five for eight for owners Maynard Miller and Michael Yoder, who purchased him from the Hoosier Classic Yearling Sale last fall for $10,000.

In all, Riggins had 24 foals sold at auction last year. He has had 19 starters with six taking records of under 2:00 and three with marks under the 1:55 time barrier. He has 31 foals registered for the two-year-old season in 2020.

Owned by Alice Allen, Riggins won 24 races during his career taking a career best time of 1:48.4 at the age of four. He raced through his six-year-old season before retiring to stud in New York in 2012. His career earnings were just short of $1 million. Riggins is currently in the Allen Stable, which is located at the Shelby County Fairgrounds. The Allens have numerous foals from Riggins currently in training in Shelbyville and have already begun breaking some yearlings for next year.