A total of 64 horses were included in nine qualifying races at Harrah’s Hoosier Park Wednesday, March 13. The program marked the first official qualifiers of 2019 in preparation for the upcoming season set to begin Friday, March 29. 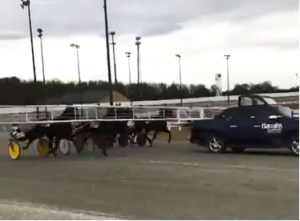 The quickest mile of the day was recorded by Always A Shark driven by Mike Detweiler. The five-year-old Always A Virgin gelding made a move to the outside at the halfway point before opening up on the field and pacing home in :28.1 to win by eight lengths over Rockin Machine and Mickey Holliday. Spoileronthebeach and John DeLong finished third in the one-mile event. A former sophomore standout, Always A Shark, trained by Leander Schwartz, has been racing in Ohio at Miami Valley Raceway in preparation for the upcoming season.

Several other names of note for year-end honors in both the pari-mutuel and county fair ranks include Coral Bella (winner in 1:56.4; driven by Sam Widger) and Victoria Swan (winner in 1:59.3; driven by DeLong).

Nearly all of the top drivers at Harrah’s Hoosier Park were on hand to drive in the first qualifier, including the track’s all-time leading driver Trace Tetrick. Widger earned the most wins on the day (3) followed by Brandon Bates, who scored two wins.

The next round of qualifiers is set for 10 a.m. Saturday, March 16 at Harrah’s Hoosier Park.