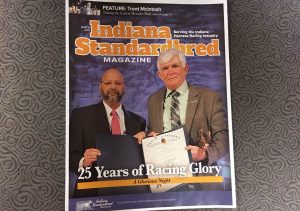 The cover of the first issue of the ISA Magazine for 2019 includes the presentation of the Sagamore of the Wabash by Mike Smith, executive director of the IHRC, to past president Jack Kieninger at the annual ISA Banquet in late January. (Photo by Tammy Knox)

The photo was snapped just after Smith presented Kieninger with the prestigious “Sagamore of the Wabash” award at the annual ISA Awards Banquet held in late January. A full story regarding all winners that evening is included in the issue as well as the latest inductees into the Hall of Fame.

Other stories featured in the issue include Trent McIntosh, new senior vice president at Harrah’s Hoosier Park, Two Old Broads partnership featuring new owners Micki Roche and Shara Weaver, the benefit dinner and raffle at the Midwest Mixed Sale/Michiana Classic Yearling Sale, and a look at Hoosier Downs in the 1950s. The issue also includes all the pertinent information regarding late closers, stakes, and county fair circuit racing for 2019, some of which are due this Friday, March 15, 2019.

The March issue of the ISA Magazine is the first of five issues planned for 2019. The next issue will hit homes in early May followed by issues in July, October and December. Those wishing to advertise in the May issue should contact Tammy Knox at tammyknox@ymail.com by April 1 to secure a place in the next issue.