Fiftydallarbill, 2017 Breeders Crown champ and multiple Indiana Sires Stakes winner, added another accolade to his impressive resume Friday, May 10 with a win at The Meadowlands in a $25,000 conditioned trot. The four-year-old son of Swan for All polished off a first over trip with a rally home in :26.3 to win by three-quarters of a length in a new lifetime mark of 1:51.3. 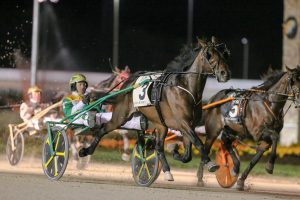 Fiftydallarbill and Trace Tetrick rally home for the win in the 2017 Breeders Crown at Harrah’s Hoosier Park. (Photo by Dean Gillette)

Owned by John Barnard, Fiftydallarbill is under the care of trainer Katricia Adams while on the East Coast. He was driven by a different Tetrick as Tim took the lines for the race, his second of the season at The Meadowlands.

Fiftydallarbill opened up 2019 with a qualifier and a win in the Open Trot at Hoosier Park before finishing second in late April. He then headed East for the $175,000 Arthur J. Cutler Memorial going the distance of one and one-eighths miles. Fiftydallarbill made a break near the wire and finished out of the money.

Fiftydallarbill now has 17 wins in 38 career starts with purse earnings nearing $900,000 in his career. He is stabled at White Birch Farm with several other horses in the Adams Stable that are owned by Barnard.