The Indiana Sired Fair Circuit will make  a stop at the Harrison County Fairgrounds in Corydon, Ind. Saturday, Sept. 29. A total of 15 races have been carded with first post set at noon. 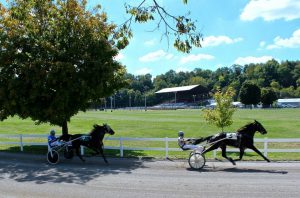 Racing is shown at the Harrison County Fairgrounds in Corydon from 2014. The facility will host 15 races Saturday, Sept. 29 in the next to last ISFC event of 2018.

Leading off the program will be three divisions of the two-year-old filly pace. The first division displays a matchup between Rockinattheryman and La Fogata. Rockinattheryman, owned, trained and driven by Don Eash, has been competitive all season, scoring  two wins in recent weeks. The Rockin Image filly has a career best time of 1:58.3, matching La Fogata’s best time.

Trained by John Merkel, La Fogata is another filly that is finishing the season strong. The Tellitlikeitis filly has four wins in 14 starts this season. She will begin from post four, which is the far outside at the Harrison County Fair. Jay Cross drives La Fogata, who is on the outside of Rockinattheryman and Eash, who start from post three in the five-horse field.

Trainer Larry King has seven two-year-old filly pacers in the first three races, including Misty Shooter in the second division. The Sand Shooter filly has earned four wins this season in 15 starts with a career best time of 2:03.1. Her biggest competition comes from the second tier in stablemate Hypo Flip, winner of two races this season. Misty Shooter begins from post four while Hypo Flip begins from the second tier. Mike Peterson is down to drive both fillies and will have a difficult decision selecting between the two fillies.

The third division of fillies will see hometown favorite Charlie Conrad behind Play To The Crowd from post one. The Always A Virgin filly has won three races this season with a career best time of 2:00.4. The biggest threat in the race will come from Miss Fire from post four for trainer King. The Straight Shooting filly has been consistent all season long, only missing the top three once in 15 starts.

The ISFC circuit is winding down for 2018. The final event will be held Saturday, Oct. 6 at the Elkhart County Fairgrounds in Goshen, Ind.