Brothers Roger and Rex McGinnis were involved in the Standardbred business long before pari-mutuel racing came to the state. Their farm, Fiddler’s Three, located on South State Street just outside the city limits of Franklin, Ind. still has a sign up along the front fence of the property that has seen numerous foals, racehorses and brood mares over the years. 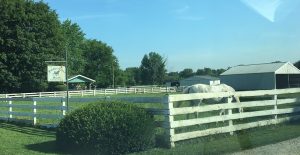 A grey horse grazes under the Fiddlers Three Farm sign just south of Franklin, Ind. owned by the McGinnis Family.

The McGinnis family bred and raised many horses at the farm. They raced outside of the state in the 1970’s and 1980’s and later raced in Indiana. Much of their early success was found in other states with horses such as Broadway Approach and Shari Spur.

Roger was featured in a story in the Daily Journal in Johnson County when Hoosier Park opened in 1994. He noted in the article that it would be nice to race closer to home. He had been a board member of the Indiana Trotting and Pacing Association at one time. Later on, Roger, a banker by trade, also owned horses with the Conrad family and had success with horses such as White Ruler until his death in 2010.

Rex is still active in racing. Horses that have raced for him in more recent years include Chalk Talk and the Guccio filly Meet the Mrs, who has been competing on the Indiana Sired Fair Circuit.