A trio of Indiana sired horses kicked off the first trifecta of the day Monday, Jan. 24 at Miami Valley Raceway with the most creative name of the three getting the win. FG’s Mondu Packrat was the dominant force at the end, picking up the win with driver Trace Tetrick in the bike. 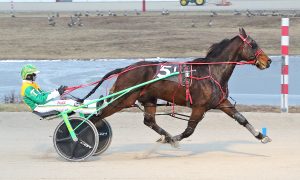 Starting from post three, FG’s Mondu Packrat went straight to the lead followed closely by Khan Blue Chip and Randy Tharps, who pursued the top and was hung on the outside past the quarter in :27.2. FG’s Mondu Packrat continued to control the tempo through the half in :55.2 and three-quarters in 1:23.4 as he pulled away from the field.

In the stretch, FG’s Mondu Packrat had more than a four length advantage in the $7,500 conditioned pace before opening up even more at the finish to win by five and one-half lengths in 1:54.1. Hypnotic Dan, a son of Hypnotic Blue Chip, finished second for Sam Widger followed by Rockin Rusty, a son of Rockin Image, driven by Skip DeMull. Even the fourth place finisher, Velocity Tater, driven by Bradley Ferguson, represented Indiana as a son of Rockin Image.

FG’s Mondu Packrat was the favorite of the field, paying $3.00. The five-year-old son of Fred and Ginger is owned by Chad Slone and trained by Larry Finn. Rhonda Manship bred the gelding, who earned his first win of the year. He has seven wins in 43 starts and his earnings now top $50,000. His career best time was taken as a three-year-old at Harrah’s Hoosier Park in 1:51.1. His dam, Evelyn’s Brat, is a half sister to the Indiana pacing standout On the Virg, who has a mark of 1:50.0 and earnings of more than $441,000. She is also a half sister to Sara’s Lucky Charm, the dam of Beckhams Z Tam.