The track was lightning fast Friday, July 22 producing eight miles in under the 1:50 time barrier. One of the most surprising wins was recorded by Brooklets Banner, a six-year-old son of Personal Power who earned his mile in a time of 1:48.3 for driver Sam Widger. 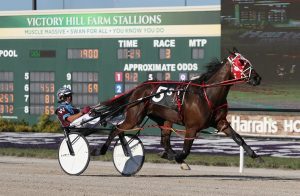 Brooklets Banner rallied home for a big mile Friday with Sam Widger in the bike. They duo won in 1:48.2. Photo by Dean Gillette

Starting from the center of the pack in the $30,000 claiming event, Brooklets Banner rallied out and was on top by open lengths at the quarter in :25.3. The gelding kept the pace lively, striding by the half in :53.1 and three-quarters in 1:20.4. In the stretch, Brooklets Banner kept the tempo going and paced home for the win in 1:48.2 by three and one-half lengths. Hot Deuce and Rickly Macomber Jr. finished second over National Sport and Trace Tetrick for third. The first seven finishers paced under the 1:50 time barrier in the claimer.

Brooklets Banner paid $6.40 for the win. Matthew Riggle trains the claimer, who is also owned by Riggle. The gelding sports the farm name of Gary Wilcox’s Brooklets farm in Urbana, Ind. It was his fourth win of the season in 11 starts. He went winless in seven starts last year at five. His previous best time was 1:50.3 taken as a four-year-old. Riggle just claimed the gelding in his last start from Wilcox.

Brooklets Banner is the last foal from Wilcox’s mare Armbro Banjo, who has produced seven winners in nine foals, all of which raced. The maternal side has quite a history with the third dam being the great Sandra Lil, who was the 1975 Older Pacing Mare of the Year. She was a 100 percent producer and her foals have gone on to have foals that have produced some great racehorses. Armbro Banjo is a half sister to the dam of the standout Indiana sired Rocket Fuel, who retired with more than three-quarters of a million dollars in earnings and a mark of 1:50.0.

The quickest mile of the night was recorded by Soaring Now and Andy Shetler in the $97,500 Indiana Sires Stakes for three-year-old pacing colts and geldings. The JK Endofanera colt got away in third and followed along through fractions of :25.2, :53.1 and 1:21.4 before making a power move in the stretch and rallying home in :25.3 for the win, four and three-quarter lengths ahead of race favorite JK Victory and Trace Tetrick. The Longest Yard finished third for Michael Oosting.

Soaring Now paid $8.80 for the win. Aaron Stutzman trains the colt for James Miller of Kentucky. Luckiana Farm bred the sophomore, who now has a mark of 1:48.1 and has only been back of second twice in seven starts for 2022.