Fan of Terror, the popular standout Invitational pacer from the Peter Redder Stable, came back with authority Wednesday, May 20 in the fourth qualifier of the day at Harrah’s Hoosier Park. Guided by John DeLong, the eight-year-old Western Terror gelding drew away from the field in the stretch for the win in 1:52.3. 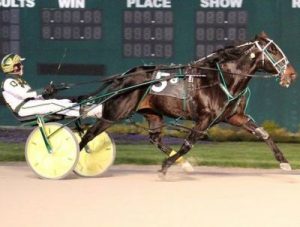 Fan of Terror and John DeLong roll to victory at Harrah’s Hoosier Park in 2019. Photo by Linscott Photography

Fan of Terror went straight to the lead from an outside post, clocking the first quarter in :28.1. From there, he continued his dominance before turning in a :27.3 final panel for the win by three and one-quarter lengths. Sharp Action Money and Ricky Macomber finished second over Checks on the Way and Trace Tetrick in third.

Fan of Terror was claimed by Therl Hensley of Daleville a little more than a year ago for $30,000 at Miami Valley Raceway. Since the claim, the Pennsylvania bred has continued to improve, scoring 18 wins last year and taking a new career best time of 1:48.4 at Harrah’s Hoosier Park. He now has in excess of $450,000 in career earnings. Earlier this year, he turned in eight starts in Ohio, scoring a win in 1:52.0.

DeLong also had an impressive winner in the race before, guiding Hes Rockin Ralphie to victory in 1:56.0. Trained by Tabitha DeLong, the three-year-old Rockin Image gelding traveled with cover to the front and paced home in :27.0 for the one and three-quarter length advantage at the wire over Family Recipe and LeWayne Miller. Fort Apache Scout and Tetrick finished third.

Owned and bred by Jesse DeLong, Hes Rockin Ralphie was making his first start of 2020. The lightly raced gelding is a half-brother to DeLong’s tough race mare Shes Lovin It, who won 19 races during her career and in excess of $171,000. The Dontgetinmyway mare is a brood mare now for DeLong and has a two-year-old named Hayzeus by Twlight Bonfire, a first crop sire in Minnesota.

Qualifiers at Harrah’s Hoosier Park will take a break Thursday, May 21 but will be back in action at Noon Friday, May 22.