Eyespywithmylileyen and John DeLong recorded the win in the evening’s featured $22,000 Fillies and Mares Open Pace Saturday, July 24. The duo stopped the timer in 1:51.0. 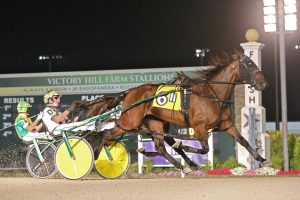 Eyespywithmylileyen and John DeLong scored the win in the Saturday feature at Indiana Grand. Photo by Dean Gillette

Starting from post six, Eyespywithmylileyen watched as numerous horses went out for the lead, spanning four across the track through the first turn in :26.3. Rose Run Vision and Ricky Macomber Jr. remained on the outside at the half in :54.3, creating an outer flow lane heading into the final half of the race.

Eyespywithmylileyen had cover moving up on the outside and by the head of the stretch, she had taken over. The six-year-old mare paced home in :27.2 for the win by one half length over Up Front Flor Ida and Trace Tetrick, Annabelle Hanover and Sam Widger finished third.

Eyespywithmylileyen is owned by Trent Stohler Stable and Benjamin Graber. She paid $7.60 to win. Stohler handles the training duties. She earned her second win of 2021 in the effort. Earlier this season she took a new lifetime mark of 1:49.2 at Harrah’s Hoosier Park. The New Zealand bred mare now has 12 wins in 28 starts. Overall, she is 12 for 28 winning a combined $147,000 during her career. Two of her victories were recorded in New Zealand before she was exported to North America.